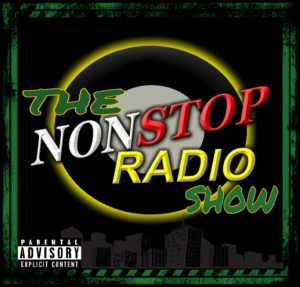 The Nonstop Radio Show, created and hosted by underground hip hop artist EMillio EgBar, was founded in the winter of 2013 in Harlem, NY… Following the brief, but successful run of 2mUch Radio, which lasted for 7 episodes, EMillio decided to keep building upon what he helped to establish with fellow underground hip hop artist Jepardy… The Nonstop Radio Show was built as a platform designed to showcase up and coming unsigned talent from around the world who don’t have the means to gain exposure outside of their home markets… It was created as a place where fans of true hip hop and r&b can come away from the mainstream radio stations and hear premier talent unheard of on the FM dial… Named after a close friend and fellow artist Carlito “Non Stop” Leaks (who tragically passed away in September of 2011) The Nonstop Radio Show’s first episode aired on June 1st , 2016… Since then, The Nonstop Radio Show has been home to some of the best hip hop and R&B artist worldwide, and has a growing fan base in both the United States and Internationally…. The Nonstop Radio Show has hosted mainstream artist such as Wu Tang Clan/Sunz of Man’s Heaven Razah aka Hell Razah, Helecia Choyce aka SKG formerly of Death Row Records, 90’s Hip Hop star Positive K who’s known for his hit “I Gotta Man” and Mr. CAP of Houston, TX’s legendary South Park Coalition in its famed “In Da Spotlight” interview segment… EMillio’s goal for The Nonstop Radio Show is to be one of the premier platforms known for launching the careers of some of Hip Hop’s future stars
soundcloud.com/nonstop-radio-show
Twitter: @NonStopRadio212
@TheEMillioEgBar
Instagram: @the_nonstop_radio_show